Nike as a company came into existence only in the 1960’s when a Stanford college business graduate Philip knight in 1962 started a firm to overshoot German monopoly in American markets. His attempt was seen as a move to propel American nationalism to have self-supremacy and contingency at least in sports market equipment (since it is directly with national pride). Phil knight took a bold move to not get involved in the manufacturing process and be an importer. This way he claimed the increased employment in japan, Latin America by introducing angel investors in the picture who funded this project of theirs. But disregarding such proxy control Nike Corporation still is heavily involved in the design, marketing, price regulation, market expansion. Thus all big decisions are still Nike’s decision. Nike endorses great athletes and has a much wider ideology of   ‘find athlete within you’ which is a strategy that resonates very heavily with the middle class. The biggest Nike market that has been captured is USA as the knight had originally intended. Other than that Nike’s world-class promotional marketing strategy and state of the art advertisements have left sport handprint on the first, second, and third world if not alike. Nike sales boomed in the late 1970’s since the issue of jogger shoes. Since then Nike market also expanded to Asia in 1982 when India hosted the Asian Games.

Let us say Nike wants to capture a first world market like Australia then first Nike will do a SWOT analysis to check the environmental conditions first. SWOT can include per capita income of Australia, the average life span of people, government laws to set up factories, CSR (corporate social responsibility), bank rates, relations and sanctions with other country, obesity levels, family values held by Australians, etc. after doing this it has been consciously taken care of that Nike might have to sell below market price initially to make a place. This is a very common strategy relied upon deep pockets of companies that can take a bad season only to capture the market and get a steady rise in price after that. First, they definitely have to make a place in people’s hearts for footwear because if this market goes then all the other plans of subsequent products might never see the light of the day. 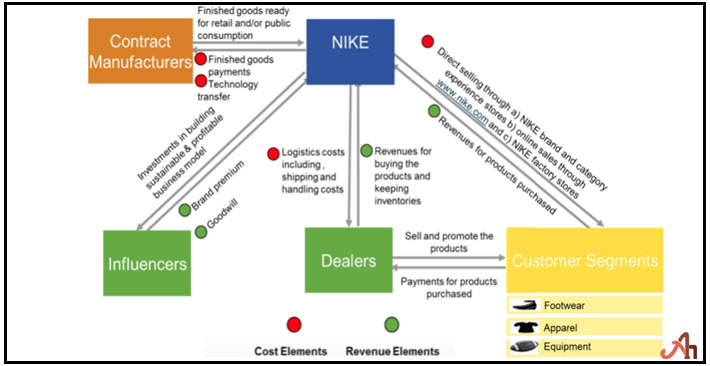 Business strategy involves opening showrooms in metros of that particular country attracting aristocrats of the city first. Since they form a higher social design of emulation demographic. Also, it involves signing up all the top athletes of the country and shooting very expensive ad campaigns. It also involves collaborating with local famous YouTube channels, television shows, funding movies, and whatnot.

Initially, Nike started out selling footwear only but slowly started to make its mark in the clothing industry too. Nike has been a leading importer of soccer studs. Then they did a whole commercial saga with Michael Jordan in the 1980’s to launch air Jordan basketball shoes. Then their alignment with top racquet stars like Roger Federer, Rafael Nadal, Serena Williams, Pete Sampras, and all the greats of their generation. Nike also endorsed heavily in badminton by collaboration with the best of Chinese and Malaysian players. Even further they are endorsing swimming, cycling greats (like Lance Armstrong), table tennis and any know sport worldwide. The eagle eye for research and development i.e. they like to keep improving no matter what. They invest heavily in test labs and are very self-critical which makes them world leaders. Also, they watch fashion trends closely and look out for what makes young demographic 16-35 years feel good about them.