During November 2014, at General Assembly, World Youth Skills Day was declared to be celebrated on July 15 by The United Nations. Thereafter (WYSD) World Youth Skills Day is officially celebrated worldwide on 15 July. World Skills International, which is a part of global recognition, feels very proud to make people aware of youth skills. The day is celebrated to raise awareness regarding the significance of acquiring skills and knowledge to face the questions of unemployment and underemployment. Also, it is a system to achieve a sustainable money-making condition for youth. Acquiring skills helps the youth to enhance their ability and make better choices.

The ratio of young people who are unemployed is greater than for adults. Almost three times more young people are unemployed as compared to adults. They are also exposed to the very poor quality of jobs, labor market inequalities, and longer school-to-work transitions. The day is important for youth development as every year it raises the paramount of expanding the competency of youth. Many organizations create an awareness campaign on the training and the development of the youth. Every year different campaigns are organized to make people aware of the importance of developing skills and also to create better employment for the youth. Last year i.e. 2017 the theme was “Skill for All”, United Nation and Worldskills.org both organized campaign #SkillsForAll.

The United Nations General Assembly establishes the World Youth Skills Day in November 2014. Education and training became the determinants of success in the labor market. But still, there are various systems that are failing to provide the necessary learning to the youth. The survey has shown that there is numerous youth who have low levels of skills and achievement in basic literacy. The development of both local and global economies would only become greater after awareness and discussion on the importance of training and skill development programs for the youth. This might contribute to a decrease in the percentage of unemployment and underemployment among youth. WorldSkills will initiate many several campaigns to spread awareness across the globe for youth development. 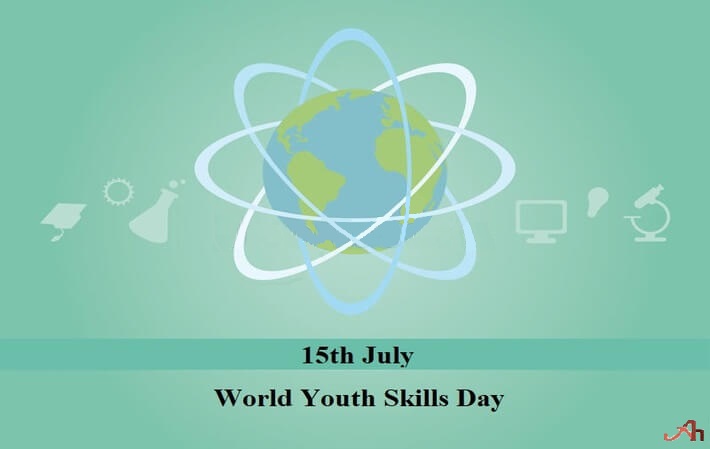 The (MSDE) Ministry of Skill Development and Entrepreneurship introduced the SKILL INDIA Campaign on July 15, 2015, at the first-ever World Youth Skills Day. It was held at Vigyan Bhawan, New Delhi. “National Skill Development Mission” was launched by Prime Minister Shri Narendra Modi during the event. This act aims to create a connection across the states to provide skill training activities. At the present time, India is facing a deficiency of compatible and well-instructed workers. Throughout 2.3 % of working people in India have been provided with the training. In contrast to that, it is around 67 % in the United Kingdom, then 77 % in Germany, 51 % in the United States of America, the second-highest in Japan with 82 % and the highest in South Korea i.e. 96 %. It has also shown that a large number of the literate workforce possess few or no job efficiency which makes them unemployable at a very large scale. Therefore, India should pay attention to improving the skills of the youth which can meet the demands of the employers in the coming years and drive economic growth. 54 % and above of the total number of citizens are under 25 years of age and 62 % are in the working-age 15-59 years. India has got little time to overcome its skill shortages. Knowing the facts, the ministry launched the NMSD which focuses on the institutional structure to execute and increase the skill development efforts all over India. A number of Bangladeshi youths suffered from unemployment hence Youth Empowerment through Skills (YES project) in Bangladesh was launched by UNDP Bangladesh and its partners in 2016. The project aimed to increase youth employment through skills in the nation.

United Nations Educational, Scientific, and Cultural Organization (UNESCO) stated that 74 Million young people were estimated to be unemployed in 2015 which computed to 13.2% youth unemployment rate. The percentage was expected to be increased in the future in most of the regions. The major reason for youth unemployment was skills. The skills which workers can offer were pretty low as compared to the demand for the skills needed. In various countries, the scenario is the same. Every Year new campaign is started by every organization to make awareness among the youth to acquire skills.

Previous Post     Next Post
Recent Post
All You Need To Know Regarding Corporate Law Assignments!!
Supreme Advantages of LAW COURSEWORK WRITING SERVICES
Accounting Assignment Solution from Proficient Accountants!
Secrets You Will Never Know About Management Assignment Help!!
Some Dissertation Writing Tips to Draft Flawless Dissertation within a Strict Timeline!
Top Programming Languages of 2021
What is the Ultimate Goal of Supply Chain Management in an Organisation?
Categories